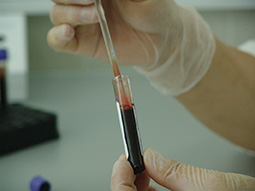 A scandal has arisen involving a company providing blood testing services after two workers from its Manchester lab were bailed following allegations that data was falsified.

The affair came to light after the results of a test carried out by Randox were challenged by lawyer Nick Freeman, dubbed by the press ‘Mr Loophole’. Mr Freeman’s client, a 26-year-old Chester man, had been arrested in December 2015 on suspicion of drug driving. He gave a blood sample which was sent to Randox for analysis.

The results claimed to show the driver was not only over the prescribed limit for cannabis, but his blood also tested positive for traces of cocaine and another drug, which the defendant disputed.

Mr Freeman said: “We asked our expert to look at the Randox report. He identified a number of analytical issues that affected the reliability of the results.”

The case was dropped in February and the Crown Prosecution Service (CPS) is now reviewing dozens of cases.

A CPS spokesperson said: “We are working with the Home Office, police and the Office of the Forensic Science Regulator to assess the impact of the testing failure at Randox Testing Services.”

Nick Freeman added: “Every drug drive case where a conviction has hinged on data from Randox must, in my view, be reviewed. This current police investigation will have massive implications for drug drivers who have been convicted on the strength of a Randox blood-sample test.”

The National Police Chiefs’ Council lead for forensic science, Chief Constable Debbie Simpson commented: “We have been made aware of a quality failure with Randox Testing Services, which is currently being investigated, and a criminal inquiry has been launched by Greater Manchester Police. Randox has provided each force with a list of cases that could have been affected. Working in partnership with the Crown Prosecution Service, we have provided guidance to forces so they are able to review each case to determine if compromised data played a part in prosecution and the CPS will then take appropriate action in any cases identified.”

In a statement issued on 16 March, the company said: “RTS Manchester identified a quality incident concerning the manipulation of quality control data. This was immediately reported to the police, the relevant authorities and affected customers.

“Our internal investigation has covered the period between June 2014 to January 2017 in which we reviewed sample analysis of blood, hair and urine for drugs of abuse in submissions. Our initial internal investigation prioritised those samples which were reported as positive for the presence of drugs and we subsequently turned our attention to results reported as negative for the presence of drugs.

“A complete review of all negative non-forensic results has now been completed and only two customers were found to be affected, those customers have been contacted directly and informed.”